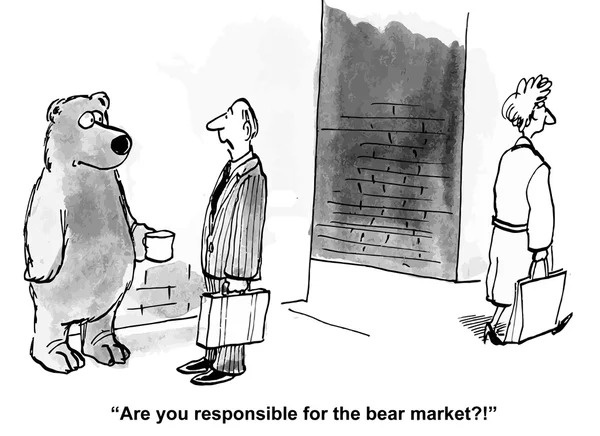 ...is a famous quote from Marty Zweig dating back to his 1970 book, Winning on Wall Street. It is a simple way of saying that the direction the Federal Reserve policy and interest rates will influence the direction of the stock market. The influence in 2022 has been a hawkish Fed (raising interest rates to slow inflation) and that hawkish posture became more pronounced as we moved through 2022. In turn, the stock market considers a Fed that is growing more hawkish a catalyst for a slowing economy and the potential for a recession. The pace at which the Fed has moved to increase rates in the short-term is unprecedented, when viewed historically (blue line below). 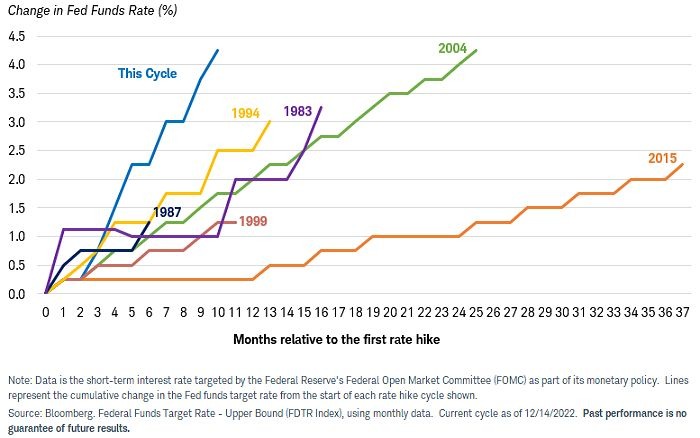 The pivot of the year came during the summer months as it seemed that inflation was headed in the right direction (lower) and the Fed may be able to pivot to cutting rates, sooner rather than later. The stock market embraced this and began to move off of the June lows. However, as key inflation data was released it began to suggest that inflation was not waning. This data led to the infamous Jackson Hole speech by Fed Chair Jerome Powell, which quickly upended the summer rally and sent the stock market on a trajectory to make new lows for the year. Chair Powell warned that it must “use our tools forcefully” to attack inflation, higher interest rates will likely persist “for some time” and while inflation may have peaked, it is not showing pronounced signs of waning. This led the market lower and ultimately, the S&P 500 hit its 2022 low of 3,577 on 10/12/2022 and while the market did not close at its lowest point for the year, it is certainly closer to that area than it is its peak (4,796 on 1/3/2022).

As illustrated below, during these summer months the inflation data remained elevated. The reports were lower than the peak recorded in June, but the data was not showing any precipitous declines. The Fed would like to see PCE (Personal Consumption Expenditures) at 2% long-term, which is their preferred measure of inflation (vs CPI – Consumer Price Index). The last report from November recorded PCE at 5.5%. There have now been multiple reports illustrating inflation is moving lower, but still some distance to the 2% Fed target. 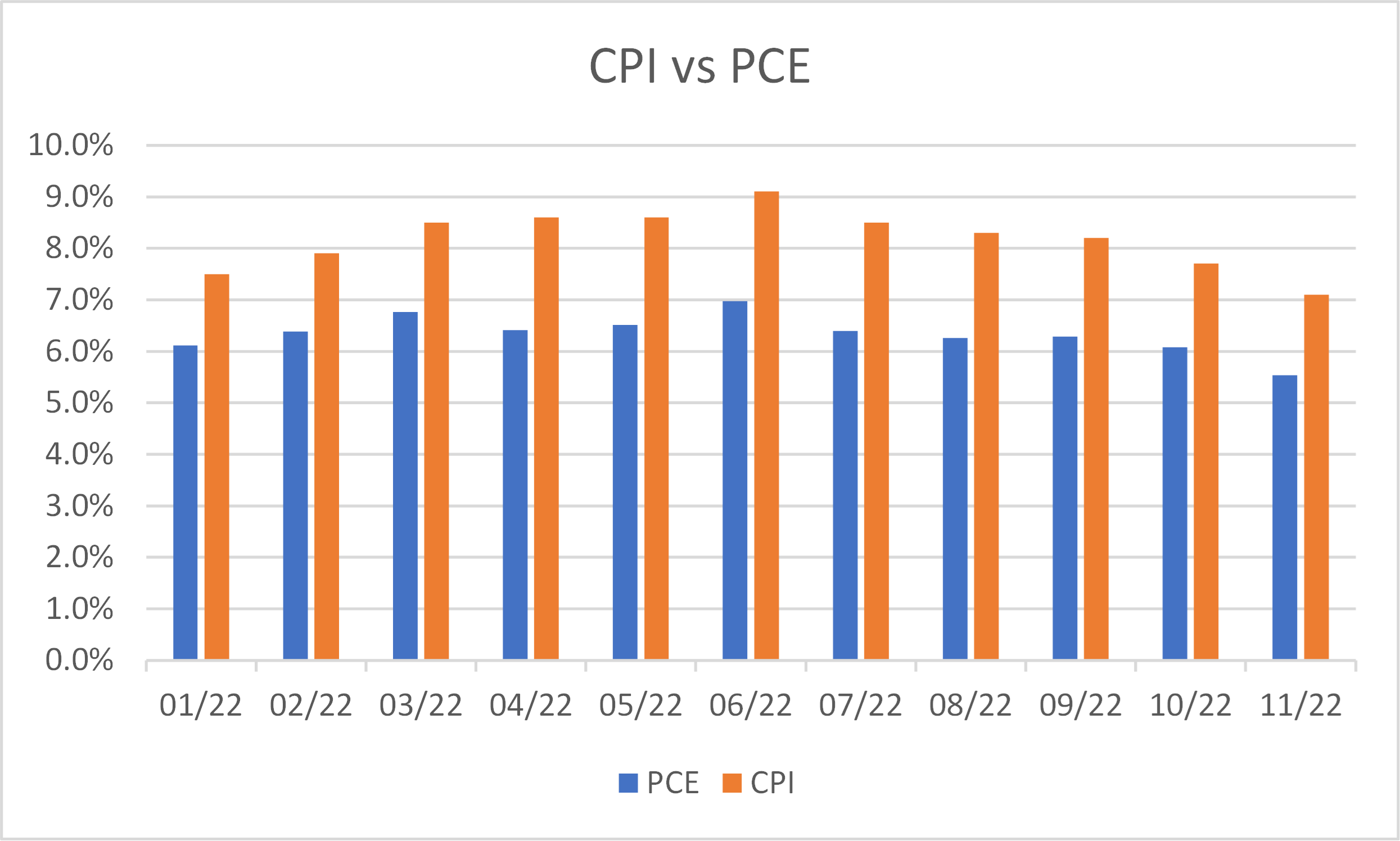 Supply chains are also showing signs of easing which is one area of inflation out of the control of the Fed. In other words, their interest rate adjustments do not have a direct impact on supply chain issues. The data in the chart below illustrates additional positive data for inflation waning. 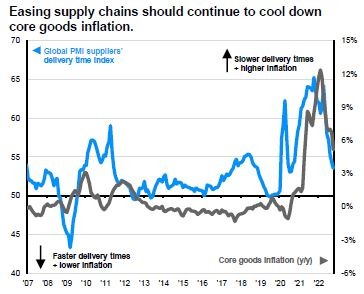 The pace at which the Fed has moved is not the only glaring fact, but also how much their policy stance has been adjusted in 12 short months. It was one year ago that the Fed removed the work ‘transitory’ from their policy statements. As a reminder, for most of 2021 the Fed’s message was that inflation was transitory, due in large part to supply chain constraints and disruptions and would self-correct as those issues abate (as the chart above is illustrating). In December of 2021, the Fed dropped that word from its vocabulary, took the stance that inflation was more entrenched, and needed to be addressed aggressively. The Fed Dot Plot (each ‘dot’ represents the projections of each Fed official on where interest rates will be in the future) estimates, as of December 15, 2021, indicated that Fed would be between 0.75% - 1.00% by the end of 2022! And when you compare that to where we are presently, 4.25% - 4.50%, you can see just how far off the Fed has been in their forecasts and actions. 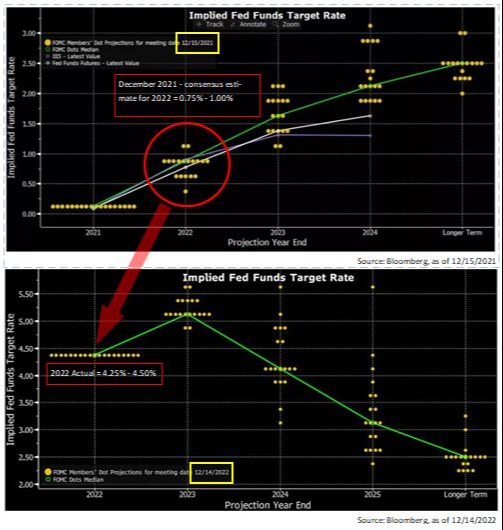 The December 14, 2022, Dot Plot implies that the Fed will peak rates in 2023 in the range of 5.00% - 5.25%, or an additional three-quarters of a percent higher from where we are today. There are a number of pundits that suggest that this is too much and while the Fed was late to start raising interest rates, they risk tightening too much and forcing the economy into a recession. It takes time for these hikes to percolate into the system and to actually be felt, some imply that it can actually take between 12 to 18 months. Additionally, Chair Powell said that by hiking interest rates, it does put an arrow in the Fed’s quiver where they will be able to lower rates if we end up in a recession. The most recent dot plot suggests one item the 2021 and 2022 dot plots have in common is that both of them see long-term (2025+) rates at 2.5%.

While the Fed is forecasting its idea of where rates are headed, the bond market has a different opinion. The 2-Year US Treasury Note has tracked the Fed Funds Rate nearly perfectly. The 2-Year closed the year at 4.42%, which is exactly where the Fed Funds Rate is presently (4.25 – 4.50%). The bond market is currently saying that the Fed will not raise rates any further and it has never implied that rates will get to the 5.00- 5.25% range that is expressed in the Dot Plot. The 2-year peaked at 4.72% on November 7th. 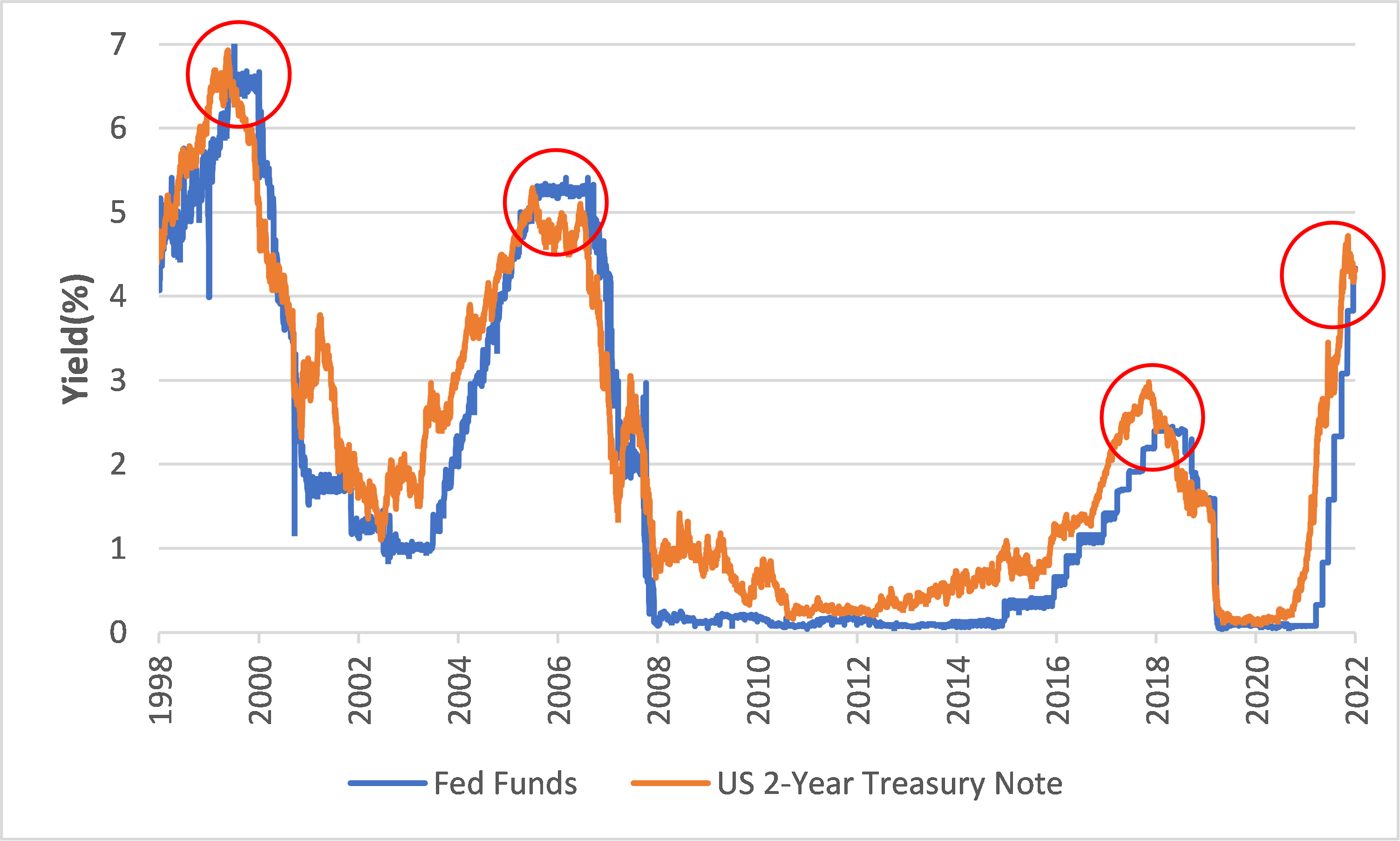 The Fed has continued to harp on a number of stubborn inflation areas, such as wages. History will suggest that wages are one of the final areas to move lower when recessions hit. The graphics below are from a JPM white paper on the subject, “Eye on the Market” from October 19, 2022. If you simply pick out the dotted blue line in each chart and compare its trough on the chart versus when the solid dark blue line troughs, you will see the point. Payrolls (wages) are the final item to fall once the US economy enters a recession. Using the Eisenhower recession as an example, the market bottomed in December 1957 and wages bottomed about 6-months later in June 1958. The only outlier is the Dot-com bubble where a minor drop appeared in payrolls ahead of the market decline (not pictured). 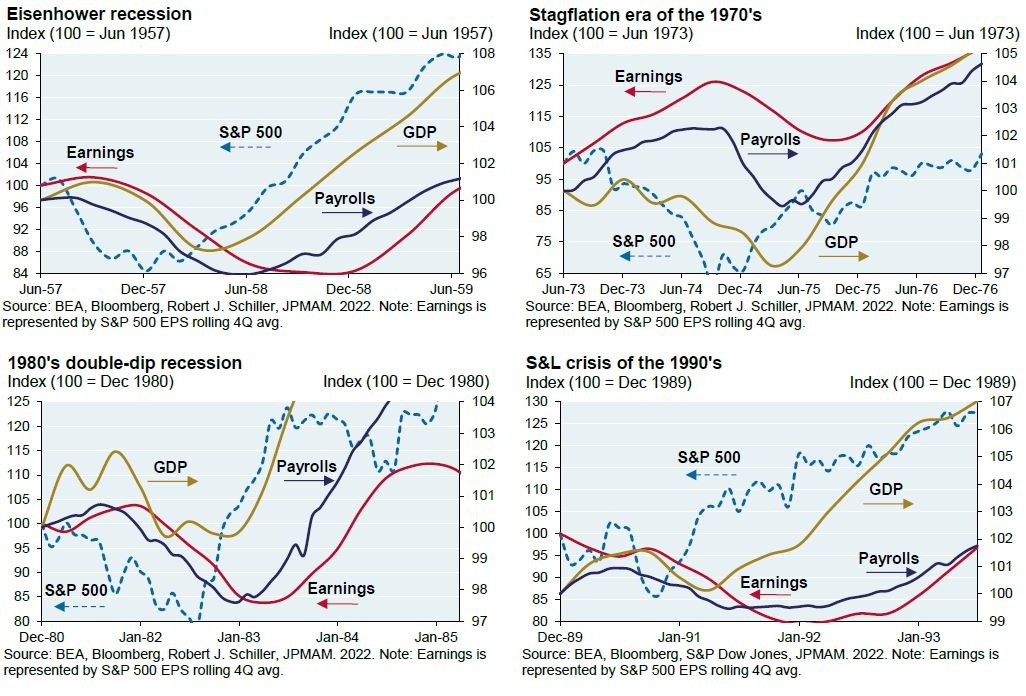 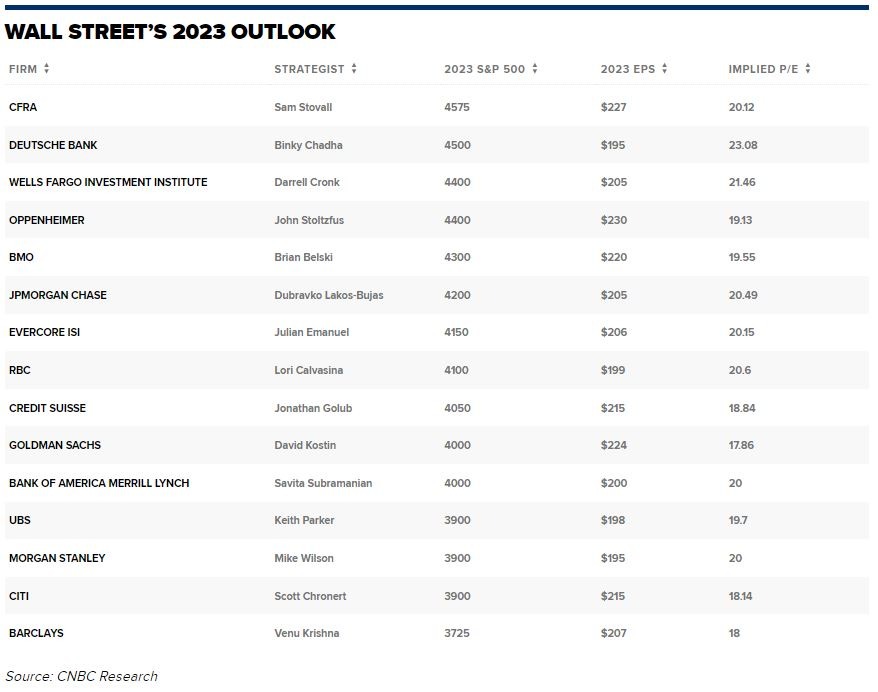 My final thoughts for 2022 are to remember that investing is a long-term journey and one that requires patience. Long-term investors have been rewarded throughout history, as the above annualized return illustrates (11.7% average return over 94 year). Markets do not always go up and we have to remind ourselves that we need to have confidence in our strategy, knowing that when it was constructed, we already knew that markets don’t always go up. The final illustration below provides some historical evidence of the upside after the market has been down 25%, close the maximum we were down in 2022. Ten years after a 25% pullback the market has averaged a 238% return! 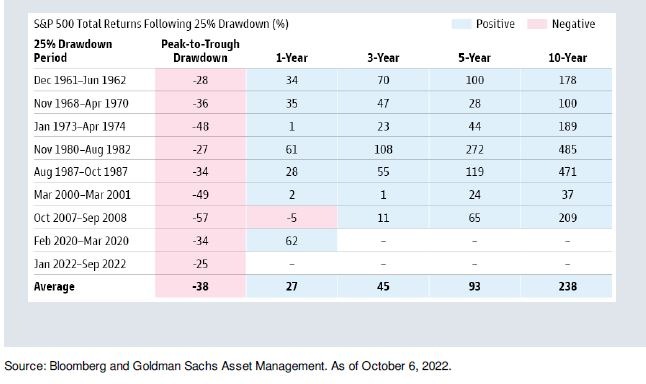 If you have any questions or would like to discuss your personal circumstance, please do not hesitate to reach out to me.

Feel free to schedule a quick 15-minute coffee chat with me.﻿