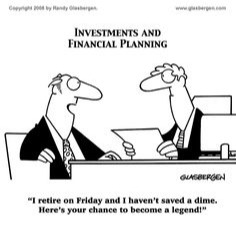 1st Quarter 2022: Some Thoughts on the Markets

2022 has begun a three-pronged attack on the stock market. The first is the conjecture and forecasts about the Fed, inflation and where interest rates are headed. Second, the actions of a dictator (madman) in Russia forcing a war on Ukraine. And finally, Covid which just doesn’t seem to go away.

The fact that the Fed is raising interest rates should not come as any surprise. The accommodative positioning that was put in place when Covid first struck is no longer necessary. Our economy is open, and the GDP prints have shown robust growth. The last four quarters were 6.3, 6.7, 2.3 and 6.9 to finish off 2020, far better than the 3.13% annual average since 1947 (according to Federal Reserve Economic Data, FRED). The biproduct of the growth acceleration has come in the form of rising prices, or inflation. Where this get tricky is that a portion of this inflation has resulted from supply chain disruptions and consumer behavior, while another portion has come from the Fed leaving stimulus on the table for too long, and the remainder is a result of the Ukraine war. The Fed has some control over the inflation picture, while some of this is out of their control.

As the chart below shows, pre-pandemic, consumers were spending more of their disposable income on services (restaurants, travel, entertainment, etc.) but there was a sudden shift to purchasing goods. Now that the economy has been open and folks are no longer stuck at home, there are signs that this balance is shifting back to service spending. 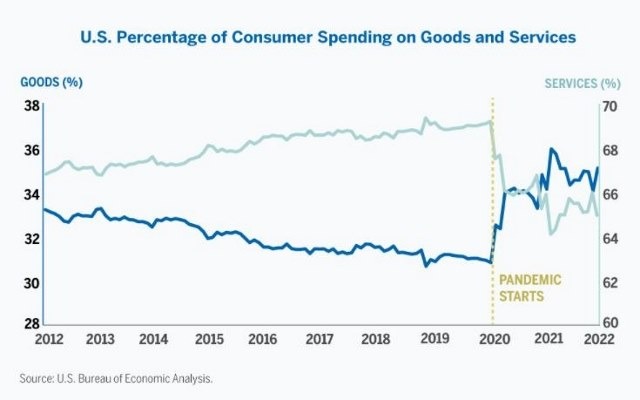 The reason this shift could be potentially important to the inflation conundrum is that if demand for goods wanes, it could also alleviate some of the supply issues and ultimately result in lower inflation. In other words, there is a portion of the inflation equation that could naturally resolve itself and does not need Fed intervention, but only a portion (hence the transient reference to inflation, heard frequently).

Oil and commodities overall have been a major cause of inflation as of late, I will address those under the Ukraine conflict, as this inflation ingredient is largely a biproduct of the war. The other leading areas of inflation are home sales and car sales, particularly used cars (+41.2% in February, according to the US Bureau of Labor Statistics). The simple fact that aggressive rate hikes seem to be on the table, and covered ad nauseum in the press, has caused mortgage rates to move higher. According to Freddie Mac, rates on a 30-year mortgage jumped this week to 4.67% (as of 3/31/2022) while starting the year at 3.22%. Meanwhile the Fed has only raised interest rates 0.25%. Increased mortgage rates should help slow the housing inflation, one of the main forces of current inflation, but this also illustrates the disconnect between pricing and reality.

The conflict in Ukraine is inexcusable. It is mindboggling to see a dictator so brazen as to invade their neighbor, in some attempt to put the former USSR back together. All while threatening use of nuclear weapons as means by which to combat outside intervention. The innocent, lives lost is beyond sad and maddening. Putting the ethics of this aside for a moment to focus on the impact economically, it has resulted in much higher energy prices, both oil and natural gas. In the US we are seeing the highest prices we have ever paid at the pump. While the EU is largely dependent on Russia for its natural gas (heating) and oil. This only helps fuel the inflation story and another catalyst forcing the Fed to act.

Now the question is how quickly will the Fed act? Will they raise interest rates two notches at the next meeting by increasing rates by 0.50% (50 basis points)? Will they raise rates 5, 6 or 7 times this year? This is where all of this becomes an extreme challenge. On one hand, the shift in consumer behavior, the hope that the war will end, the housing market cools, and the supply chain normalizes will all assist in helping ground inflation (transient inflation). The Fed needs to be careful not to raise too quickly if all these cards fall into place, but they also need to account for being late to raise rates and slow the inflation that is currently here. This is very delicate balancing act, and I don’t envy being Jerome Powell or any member of the Federal Reserve Board.

The Fed only can control the short end of the interest rate curve, meaning they are raising short-term rates which has no direct impact on the 10-year government note yield. The market (buying and selling on an exchange) dictates the direction of the 10-year yield (the interest rate of the note). The chart below illustrates the 2/10 spread, in other words it is the difference between the yield on the 2-year note and the 10-year note. (Take the two yields and subtract them from one another to end up with the spread.) As one would assume, the longer one is willing to be obligated to a note, the higher the interest they should earn (i.e., longer amount of time is earns a greater interest rate). That is true most of the time, but as I mentioned the Fed only controls the short end of that yield curve. Sometimes rates can invert, meaning you can receive a higher interest rate on a 2-year note versus a 10-year note. The chart illustrates this spread inversion has been an ominous signal in years past. Each time the 2/10 spread has inverted, it has preceded a recession (grey shade). 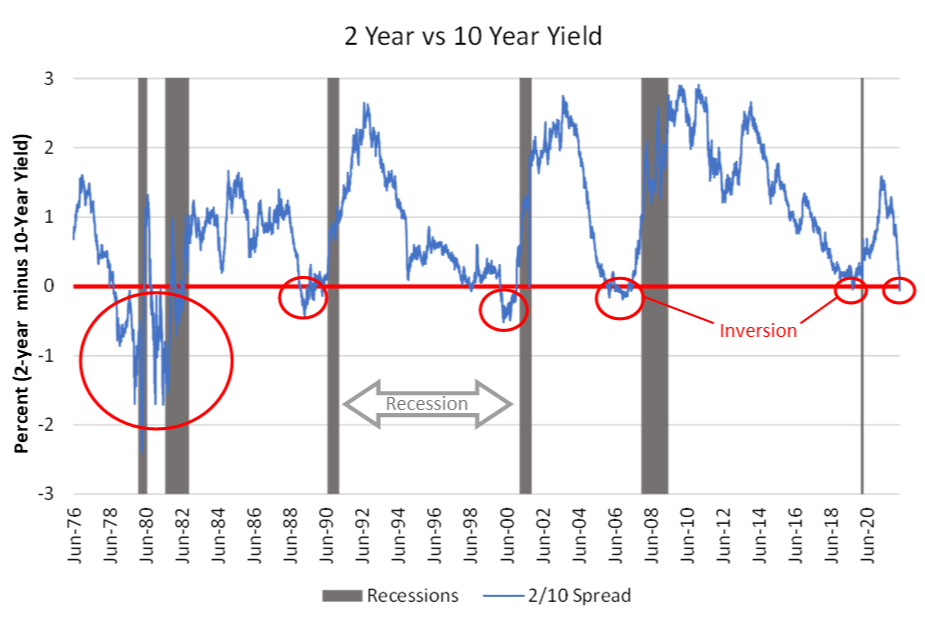 On April 1st the 2/10 spread officially inverted. But the market is also very different right now, when compared to periods of past inversion. It is tough to see a recession coming when corporate earnings are forecasted to grow, GDP is growing as robustly (as indicated above), 1.7 million jobs added during the first quarter, and there are not enough job seekers to fill the open positions. Nonetheless, this is an indicator that should not be ignored.

There is not much new to say on the Covid front; it is still present. It has been removed from the front page of the newspapers to make room for the Fed, interest rates, inflation, oil/gas prices, and the Ukraine Russia conflict. It’s interesting to see there is another strain out there that is apparently more contagious than Omicron, yet there is little fanfare about it. I recall when Omicron first hit, the day after Thanksgiving 2021, the market was down 2.3%. The point is, there is a great deal of data for the market to digest right now. Some of these issues need to be resolved so there is less headwind for the market. At this point the market is aware of the issues and trading with all these items in flux. We don’t know the timeline as to when these items will end, resolve themselves or accelerate. Until there is some closure, the market is likely limited to being rangebound and seeing days where there are large point moves in the market, in both directions. As we know from history, every event has a life cycle and when it ends, there will likely be something else to worry about. But looking back through history, these resolutions have resulted in the market moving higher. 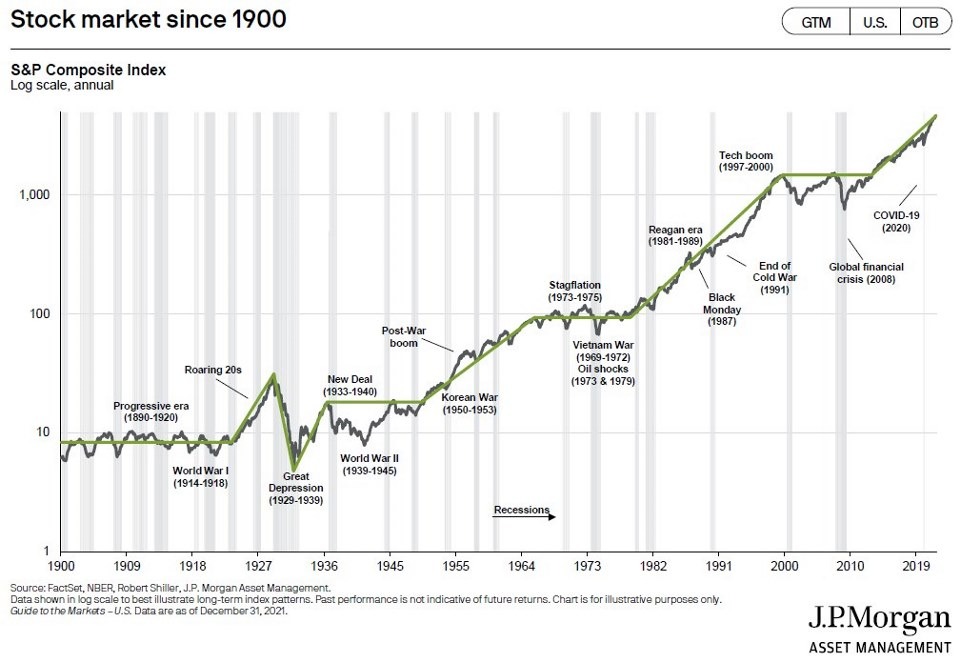 Finally, to say that 2022 has been a challenging year thus far is an understatement. And to add insult to injury, starting the year on a negative note creates its own challenges. At least if a pull-back happens in the middle, or end, of the calendar year, there were hopefully some gains in the portfolio to offset a portion of the move lower, rather than seeing red as soon as the year starts. S&P 500 hit an all-time high on January 3rd, while the Dow Jones Industrials Index posted its all-time high on January 4th, both of which peaked later than the NASDAQ, which posted its all-time high back on November 19th, 2021. While all three moved lower through mid-March, they hit a turning point over the last two weeks, where all three of these indexes recovered half of their losses for the year. 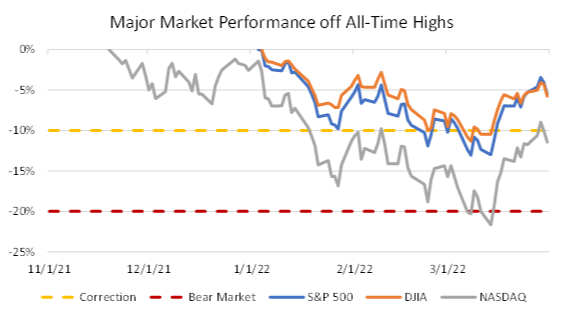 Of note in the above chart is the NASDAQ entering a bear market on March 7th. Bear market being defined as a 20% move lower off its high. In contrast, the S&P and Dow both entered correction territory (10% move lower off the high) but were nowhere near bear market territory. Stay the course, and let strategy dictate your moves, not emotion.