Dr. Jekyll and Mr. Hyde: The Tale of Two Markets 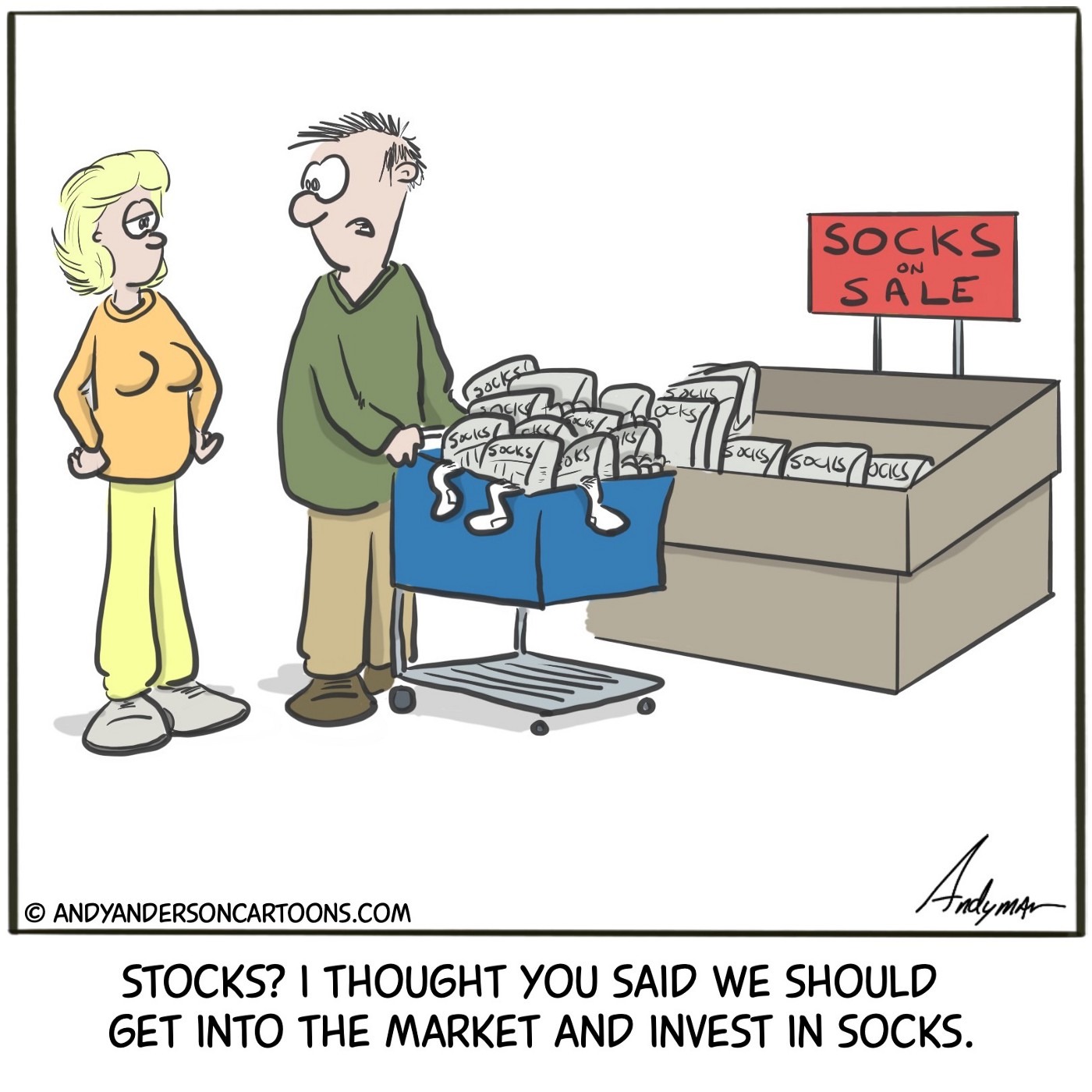 The third quarter was the tale of two very different markets. In the first half, it appeared there might be some relief with the pace and breadth of interest rate hikes by the Federal Reserve Open Market Committee (FOMC) and there was some belief that we would see the peak of interest rate hikes in January 2023. These sentiments also relieved fears of an inevitable recession. While starting the 3rd quarter, already down 20% for the year, the market (S&P 500) rallied nearly 14% during the first six weeks of the quarter (and 17% off the mid-June lows!).

As the second half of the quarter began, it was like a light switch was flipped. The FOMC suddenly became very vocal with their hawkish stance, and this became very apparent in the press conference Jerome Powell delivered at the annual Jackson Hole meeting. Lasting exactly 9 minutes, it was succinct and to the point; there were more interest rate hikes coming and rates will likely stay elevated for a longer period of time. These comments resurrected concern of an impending recession. The market gave the first half rally back, and then some, pulling back 17% in the second half of the quarter and is now -24.77% year-to-date, which is the low of the year. The market is currently trading at the same levels it was on November 2nd, 2020 (and portfolio values along with it). 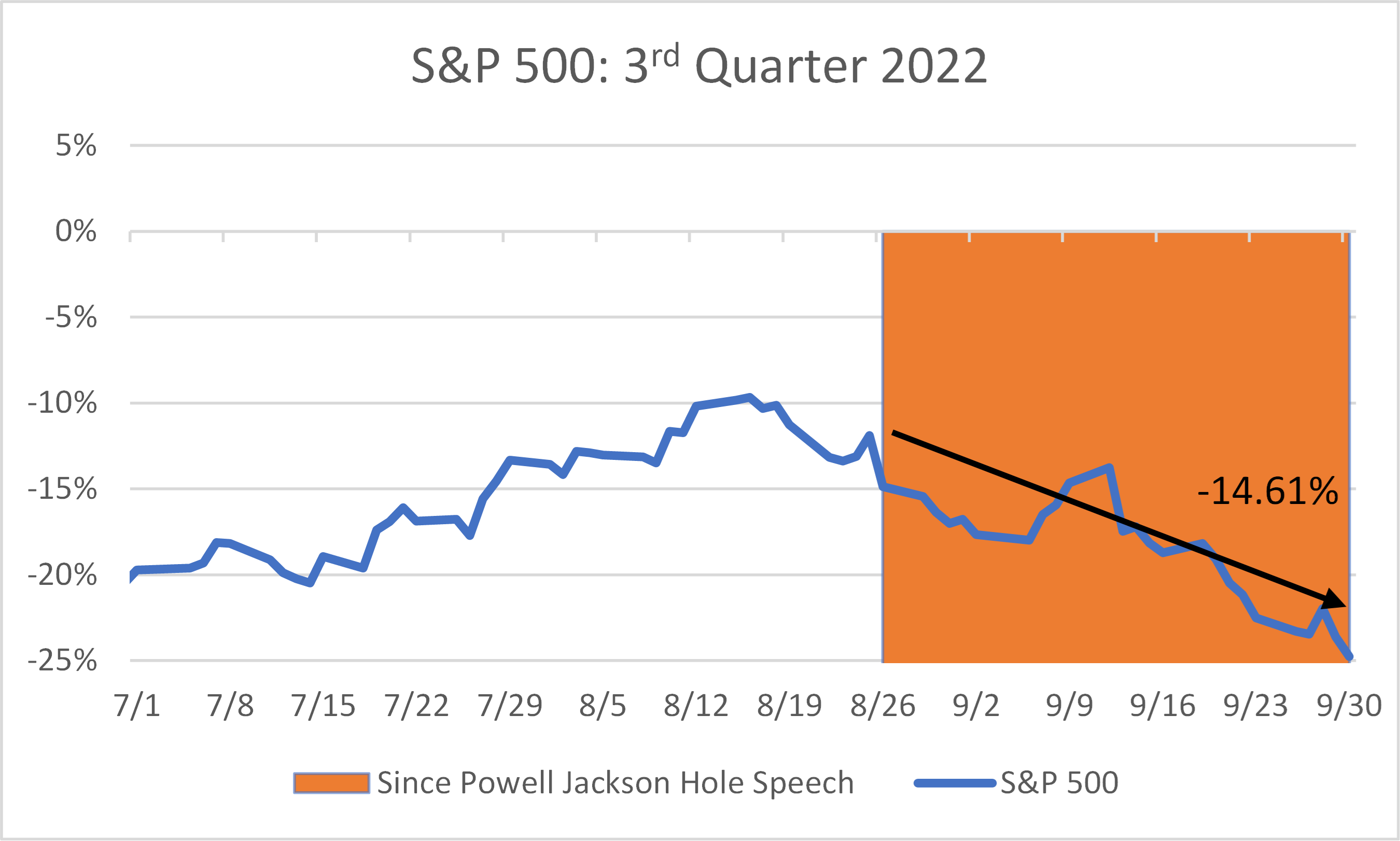 The above chart illustrates the whipsaw action we felt during the quarter. The period since the Jackson Hole speech is highlighted in orange and the market was down 5 of the last 6 weeks to end the quarter. The FOMC, and Chair Powell, have stressed they need to fight inflation, “until the job is done”. This was evident again at the FOMC’s September 21st policy rate decision where they raised rates an additional 0.75% (75 basis points). This is the fifth straight rate hike this year and the third time in a row they raised by 0.75%. The last FOMC meeting was in July and the market was pricing in a 0.50% rate hike for September, versus the 0.75% that took place. Chair Powell noted, “We have to get inflation behind us. I wish there were a painless way to do that. There isn’t.” The FOMC is trying to coax inflation back to its 2% historical range.

What changed from the improving news at the beginning of the quarter to end on such a sour note? It was the fact that some areas of inflation are simply not fading as quickly the FOMC had hoped. One of the standout areas is the job market. As of the September update, there had been 5.8 million jobs added in the last 12 months while the unemployment rate remained close to its historical low at 3.7%. The FOMC would like to see the unemployment rate move higher and job creation slow as it is feeding wage inflation. (This WSJ article does a great job of explaining why inflation is prevalent and provides a plain English explanation.) The stock market pivoted, and higher interest rates instantly became reality. As illustrated below is the projected path of the FOMC after the June and September meetings. There is a noticeable spike in these projections which must be instantly digested by the stock market (stock market moves lower, rates are higher thus pushing fixed income prices down). Furthermore, the further the FOMC has to hike rates more aggressively which supports the argument in favor of a recession in the near future. 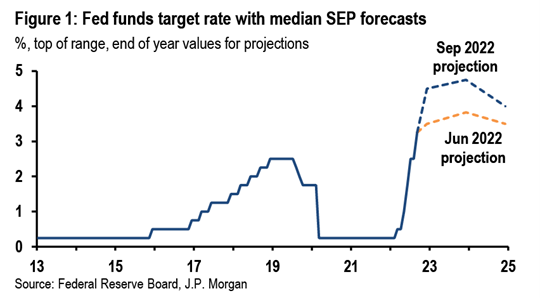 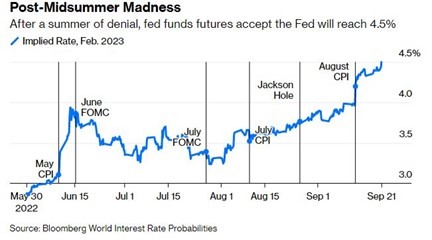 The main reason for portfolios being down as much as they have this year is a function of what the fixed income markets are doing. The chart below shows the annual performance of the equity and fixed income markets, historically, since 1977. There has never been a period with both fixed income and equities have been down in the same year, let alone both moving lower by double-digits. In previous years, when the equity markets were down, fixed income was positive save for the single occurrence where it was flat. Fixed income is typically where investors go for stability, especially in a down market. That protection by fixed income markets simply does not exist right now. There have been relatively few areas to hide this year. 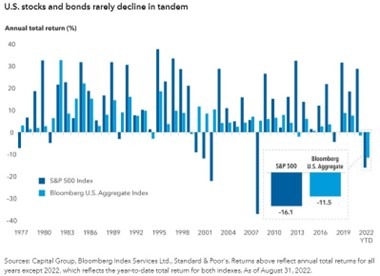 One additional point on the quarter, the Dow Jones officially entered bear market territory on September 26th, closing 20% off its January 4, 2022, high. Illustrated below is the performance of the three major indices through the end of the 3rd quarter with a red marker indicating when each index entered bear market territory. However, the S&P 500 is the more widely used gage of the ‘market’ as it represents the 500 largest companies that Standard and Poor’s selects for the index. 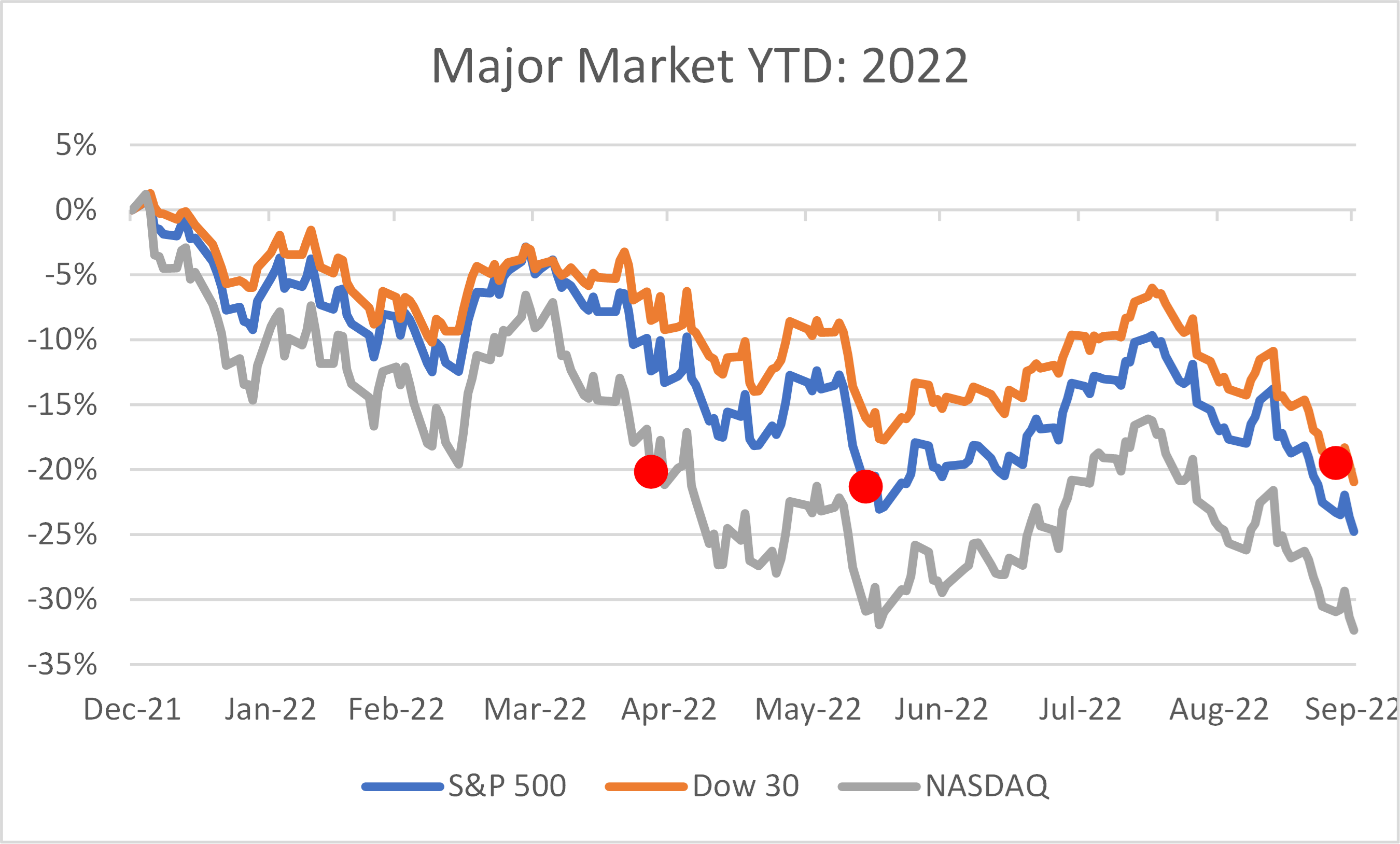 While it has not been a great year there is some positivity to focus on. It is important to note that the market simply does not like uncertainty and that is the theme of the year. We have seen the FOMC shift from saying, “inflation is transitory” to accepting that it is sticky and will remain without intervention by the FOMC. You might be asking yourself, ‘how is this positive news?’ Currently, the FOMC is signaling 0.50%, or less, of rate hikes in 2023. Plus, looking out to 2025 and beyond, they believe they will be back around 2.5%. Which means that it is currently forecasted that rates will rise in the short to medium term while looking to lower rates beginning in 2024 on the path back to 2.5%. But back to the market not liking uncertainty, the FOMC has obviously been aggressive and raised rates at an unprecedented pace. This in and of itself has been a cause of consternation and uncertainty. The chart below, illustrates how the FOMC is 70% complete the rate projections they laid out at the September 2022 FOMC meeting. Simply put, the FOMC is nearing the end of what is presently being forecasted and when they finally pause, this will remove a major layer of uncertainty, which should be positive for the market. 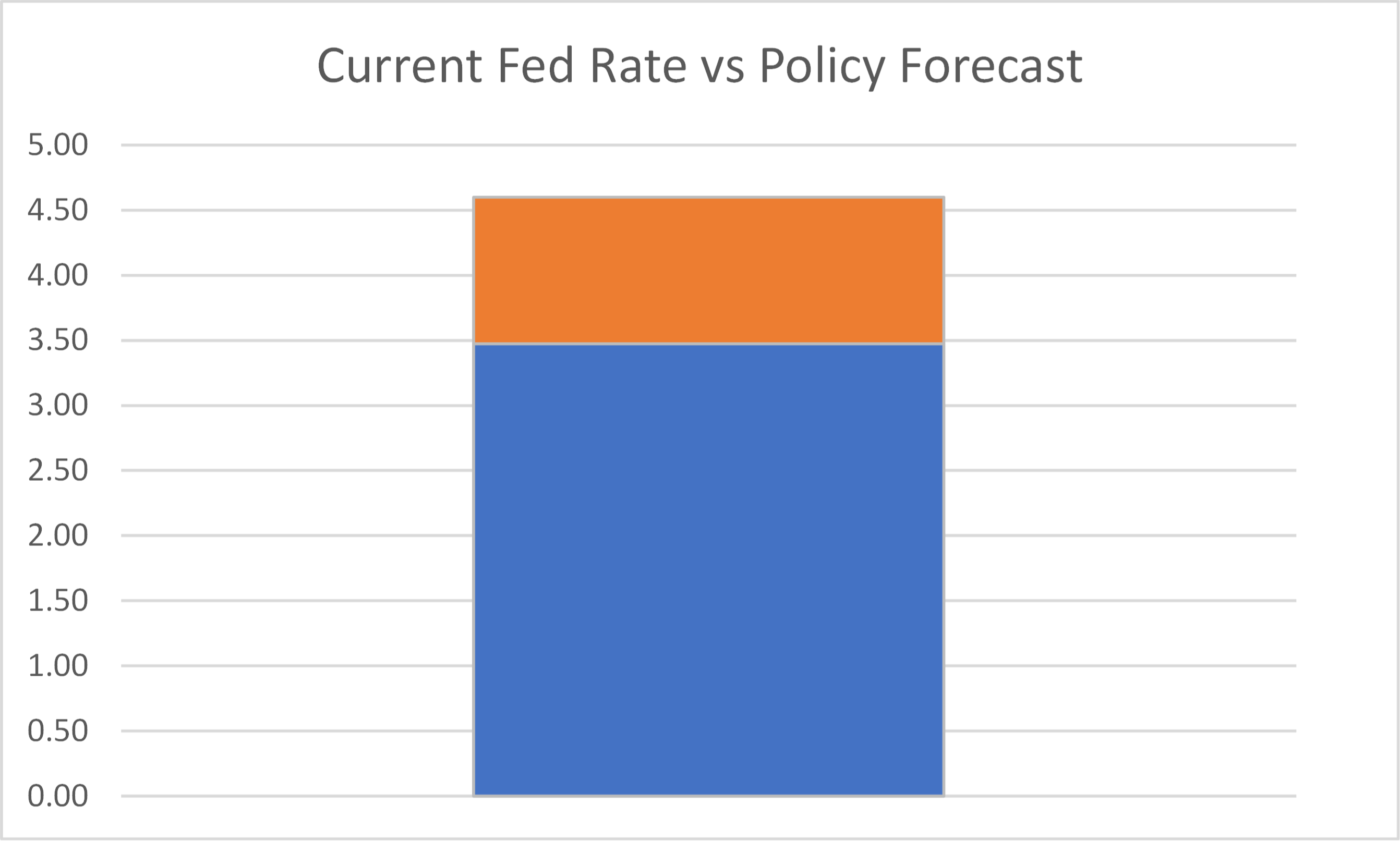 Another reminder to investors is that that the stock market is forward looking and is the ultimate predictive indicator. Every economic or earnings report that comes out is telling you what already happened. The stock market is telling you where things are headed and the pullback that we have seen, since the mid-point of the quarter, is the market pricing in a recession. This is an important point as many feel that if a recession is inevitable, the stock market will only get worse from here. Of course, it could. But if we use history as a guide, it is apparent in previous situations that the market tends to trough before the economy does. Illustrated below, the market is moving higher as the economy is progressing towards the trough of the recession. 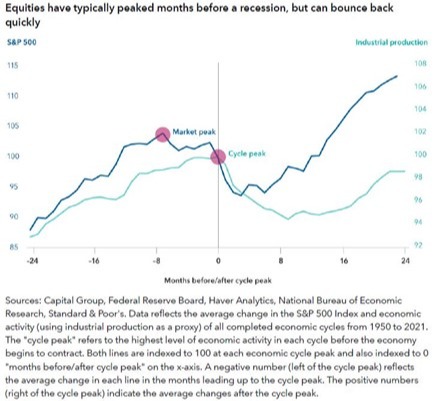 An addition bright point is evident when reviewing historical performance before, during, and after a recession. As shown below, these periods typically last 10 months with an average pullback (market peak to trough) in the S&P 500 of 28.5%. Twelve months after the recession the market has average a positive gain of 47%. To date, the S&P 500 is down 24.77%, which is about 4% from the historical average. Obviously, the NBER (National Bureau of Economic Research) has not signaled that we are in fact in a recession, but the NBER admits (6th to last question) that it takes between 4 and 21 months to declare that a recession has officially started! As an example, the 2020 COVID recession the lag was 15 months. Meaning, in July of 2021 the NBER released the news that we were in a recession as of April 2020. If you recall back to that time, the S&P 500 gained 75% (4/1/2020 – 7/1/2021) during the period of time from when the S&P 500 was actually in a recession until the NBER reported we were!! Hence the divergence between the two lines in the above graph and why going into a recession does not necessarily mean the market will go lower when that announcement is made. 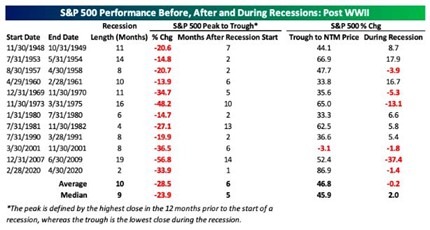 Shifting gears to the November mid-terms offers some additional bright spots when looking at historical market data. In mid-term election years, market performance tends to be muted until November: 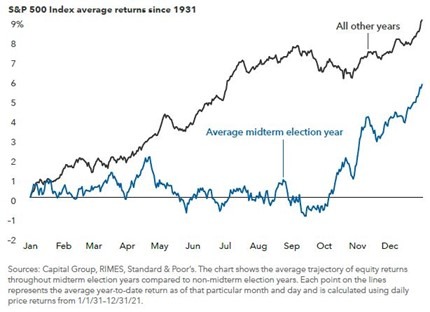 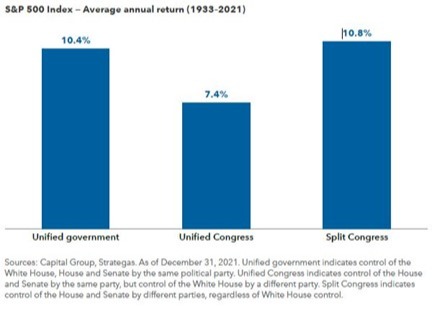 In closing, it has been a difficult year as the market is currently at lows for the year. This volatility will likely continue as long as the FOMC is raising rates and uncertainty exists around the pace, breadth and whether we actually end up in a recession or not (the market does not like uncertainty). It appears more and more likely that a recession is now the base cases. However, the FOMC is almost to the top of the range (70% there) that is presently being forecasted for policy rates, the average S&P 500 pullback during recessionary periods is near where the market is presently trading, and S&P 500 performance off an eventual trough has been quite robust historically (+46.8%). Finally, mid-terms may offer a shift in the news cycle to something other than the FOMC and the market has historically been muted in mid-term years while having positive performance, on average, after elections are complete. As Charlie Munger (Berkshire Hathaway) once said, “The world is full of foolish gamblers, and they do not do as well as the patient investor.”

What can you do now? There is opportunity in US Treasury Notes, with yields north of 4% on some government Notes. One could dollar cost average into the market, seeing as we have retreated to where the market last traded in 2020. Tax loss harvesting is a strategy that may be viable in taxable accounts. And don’t overlook ROTH conversions as it may be advantageous to convert positions that have been beaten up, pay tax on them now and move them into your ROTH. If these positions revert back to the ranges that we saw at the beginning of the year, all of those gains are now sheltered in a tax-free account. Please let me know if you would like to discuss any of these strategies.

Please let me now how I can help. Click here to set up a 15-minute coffee chat.