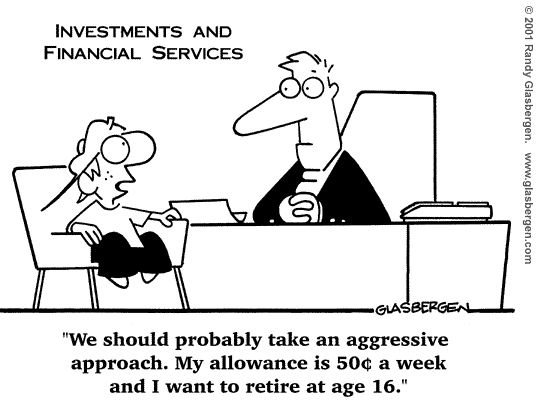 There is a currently an ongoing race between growth and inflation. The outcome the Fed is trying to engineer, and market participants are hopeful to see, is inflation slowing before growth does. The emphasis and order of operation is important here. Why? The order could dictate whether we end up with a soft landing or in an environment where a recession the prevailing theme or even worse, stagflation. Stagflation and/or a recession do not appear to be the base scenario at this time. The market is displaying concern by logging a six-month losing streak, crystalized by the bear market we entered on June 13, 2022 (defined as a 20% move lower off the all-time S&P 500 high), and the daily grind of volatility as the market has large percentage swings. 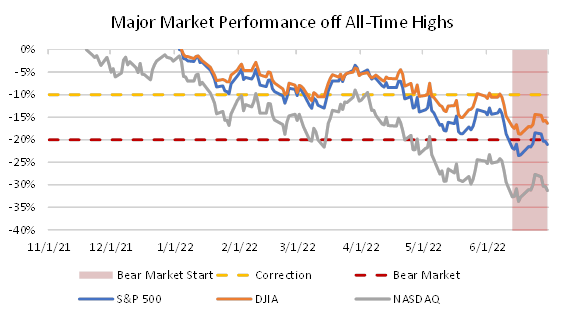 The press throws around a number of terms regularly. Understanding these terms, how they apply to the current market environment, and what this means for your portfolio will hopefully assist in bring clarity to what is currently transpiring. Merriam-Webster defines stagflation as, “persistent inflation combined with stagnant consumer demand and relatively high unemployment”. And Investopedia defines a soft landing as, “...a cyclical slowdown in economic growth that avoids recession. A soft landing is the goal of a central bank when it seeks to raise interest rates just enough to stop an economy from overheating and experiencing high inflation, without causing a severe downturn.” Consumer demand remains high, despite higher prices, and there are currently 1.9 jobs open for every 1 person seeking a position with unemployment running at a historical low. (See Unemployment: 1948 – 2022 YTD chart below. The orange line anchors the current unemployment rate to illustrate that there have been very few historical periods, back to 1948, where the unemployment rate is as low as it is now.) Notably, the stagflation vs inflation graphic below illustrates that we are presently in an inflationary environment. GDP is forecast to be positive this year, which means the economy is continuing to grow. So, what gives? 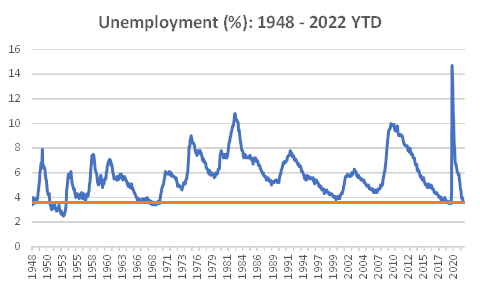 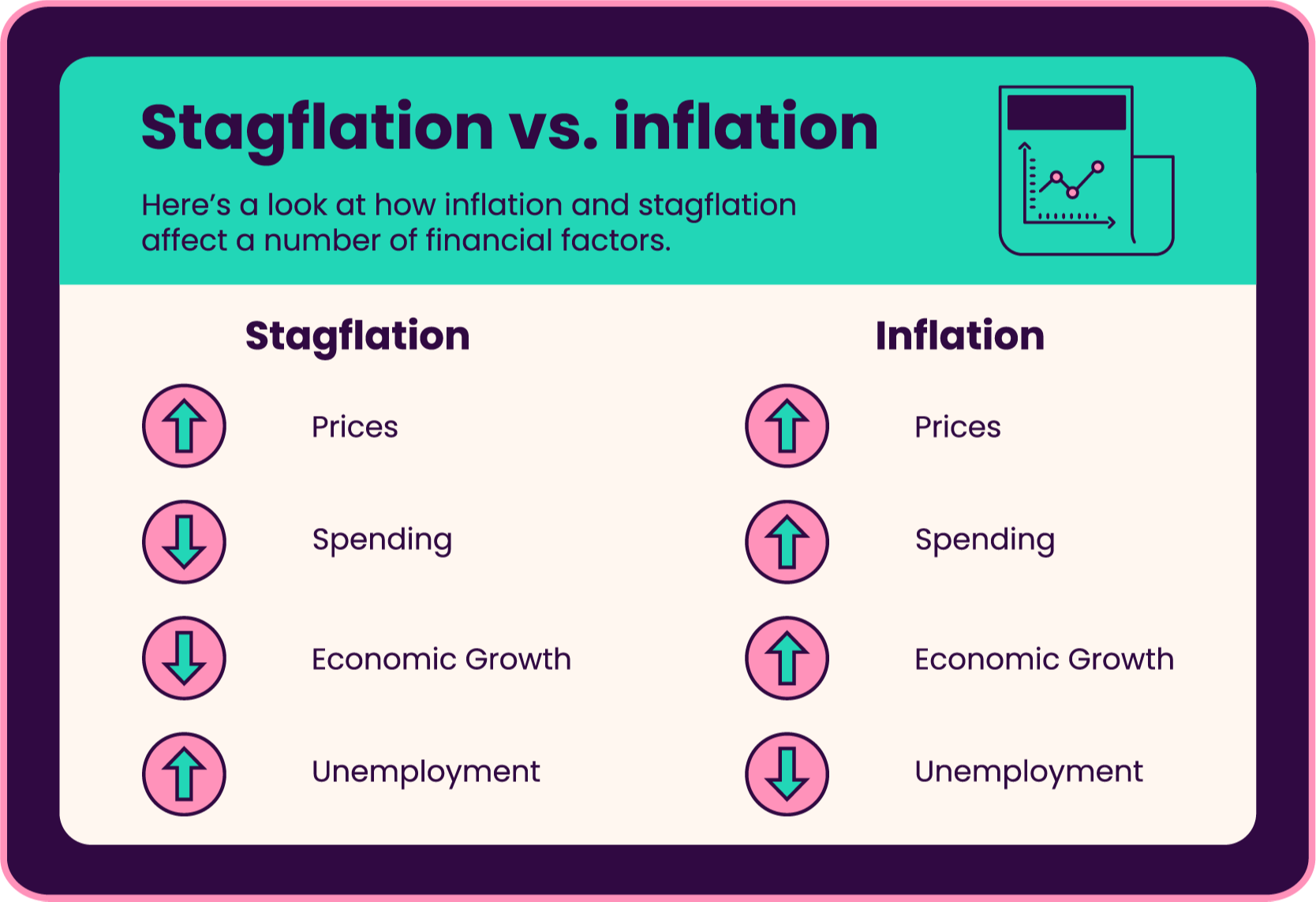 As I detailed in my 1st Quarter Thoughts on the Market, the Fed, inflation, and Russia/Ukraine are wreaking havoc on the market. The Fed has had to rip up their playbook on rate policy, going from that of a tortoise to that of a hare. The two charts below are what are referred to as the Fed Dot Plot. Each dot on the chart below reflects the view of one Fed official. It is important to note that not all are voting members, but official’s view is displayed in the chart (one official = one dot per year). At each Fed meeting (there are 10 meetings per year) the Fed members express their view of where they believe Fed Funds Rates will be in the current year, a couple of years forward, and longer term. Below, I provided the dot plot from June 2021 and June 2022. Note the huge difference in the curve, or the green line, between the two charts as well as the breadth of views of each of the Fed Governors. 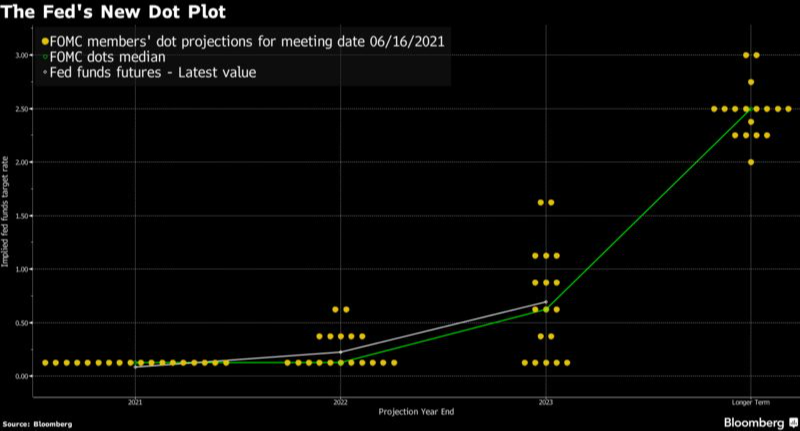 The reason for this detail is to provide substance to the market’s lousy start this year. In fact, CNBC mentioned, this has been the worst start of a year in more than 50 years, back to 1970. To date the S&P 500 is down 20.58% and is 21.08% off the all-time high posted on January 3, 2022. As each month passes, there have not been significant signs that inflation is waning. In turn, this has caused the Fed to take the aggressive measures I have highlighted, as they originally believed that inflation would naturally slow. The speed at which the Fed now has to move (the hare analogy) has market participants and experts concerned that they will go too far too fast. Meaning they will raise interest rates so quickly that it will slow down growth and put the US economy into a recession. What the Fed is trying to accomplish is create the goldilocks scenario, or soft-landing, where they raise interest rates just right so as to fight off inflation while still keeping the economic growth wheels turning. The uncertainty around what the future holds (recession or not, stagflation or not) is the reason the market has moved lower, it is essentially beginning to price in the worst-case scenario.

The chart below plots three data points, the Fed Funds Rate (blue line), recessions (yellow shading) and historical soft landings (blue shaded oval). Highlighting the 1990s decade offers the perfect historical perspective to illustrate the soft-landing vs recession example. Many may remember the late 1990s as a time when you could take out a bulletin board, place the names of any publicly traded internet stock on it, throw a dart, buy shares of whatever the dart hit, and you would almost certainly watch that trade go higher. Earnings and valuations did not matter for tech companies and growth seemed like it would never end…until it did. The 1990s came to an end when Alan Greenspan (Fed Chief at the time) raised interest rates too far, too fast and the US economy went into a recession. On the heels of that recession, we also had the sad events of 9/11 which only made that negative period last longer. But there was a silver lining in the middle of the 1990s. If you look at the chart below, you can see where the Fed raised interest rates beginning February 1994, highlighted with blue shading (+0.25%, +0.25%, +0.25%, +0.50%, +0.50%, +0.75%, +0.50%) and stopped February 1995. There was a pause and then a move lower in July 1995 (-0.25%) followed by some small adjustments of 0.25% back and forth, but ultimately this allowed the bull market and an expanding economy to roll on for another four years. 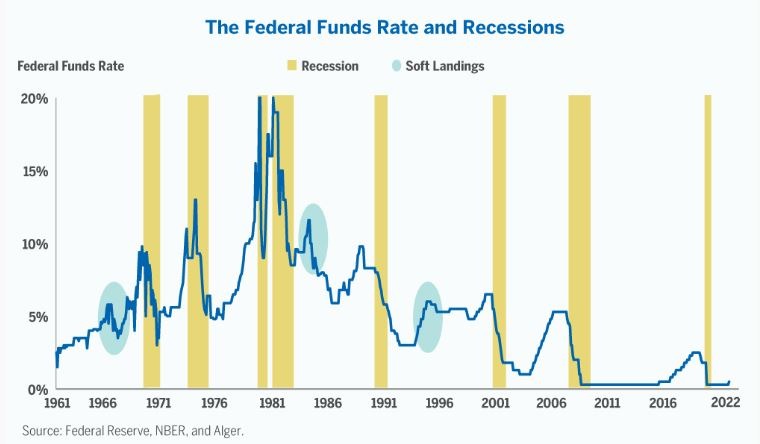 It is important to note that while the Fed is increasing interest rates to slow growth and inflation, their policies do not have a direct impact on the price of oil/gas or on wage growth (wages moving higher as a result of workers job hopping for higher wages and 1.9 jobs per person looking). If there were peace in the Ukraine/Russia conflict it would almost immediately lead to lower energy prices and slowing growth should cool the job market. However, corporate profit margins are near an all-time high, which means that most companies have some room to absorb inflationary pressures and still remain highly profitable (left-hand chart below): 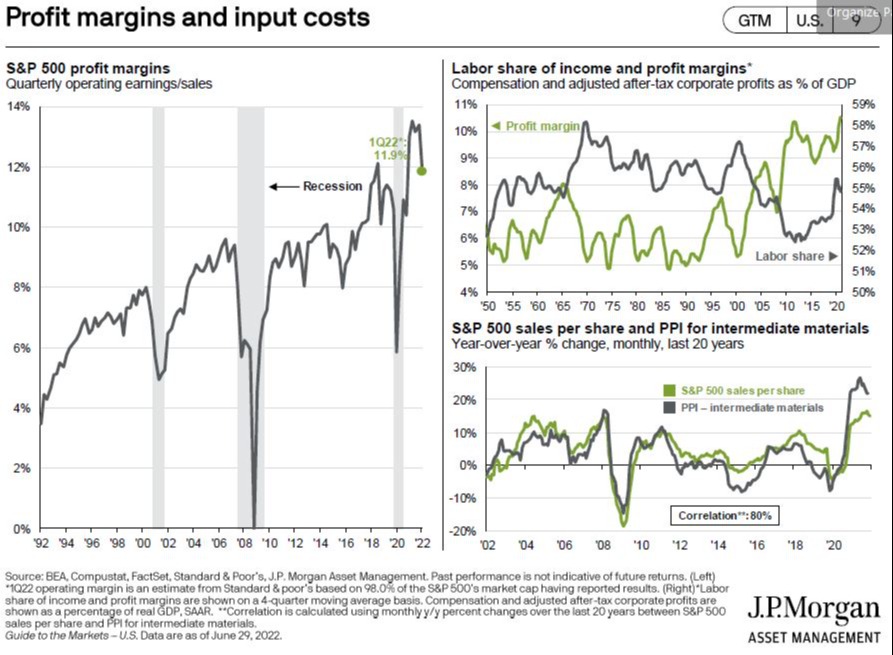 There has been no safe place to hide this year with every sector, save for energy, lower in 2022. Even with a rally in the first five months of the year, energy is down about 50% off its highs in last month: 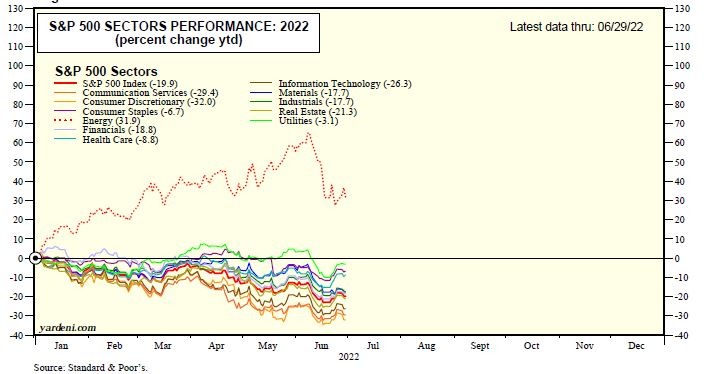 Every market segment: domestic/foreign, large/small companies and even fixed income is lower, with most showing double-digit losses: 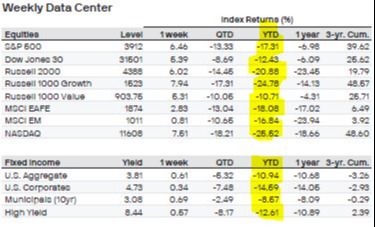 The table below highlights the top 10 stocks in the S&P 500 and the Dow Jones Industrials Index. The Dow list skips over any name that already appears in the S&P list to provide performance on additional names. Out of the 20 names displayed, half are down 20%+ and only 4 are positive on the year:

There is a silver lining. This is not the first time we have had volatility in the market, and it won’t be the last. This too will pass, leaving in its path new worries for the future. Below are two charts, that when viewed together are to remind the reader to stay focused on the big picture and long term. The first shows the quarterly returns of the S&P 500 back to 1982. As you can see there were more up quarters than down, and there has been a good deal of volatility over the years. The second chart shows the value of $10,000 invested in the S&P 500 in 1982. This illustrates a buy and hold strategy where one does not sell when times get tough, rather they stay invested for the long term. $10,000 invested in the S&P 500 in 1982 turned into more than $1,000,000 through a buy and hold strategy: 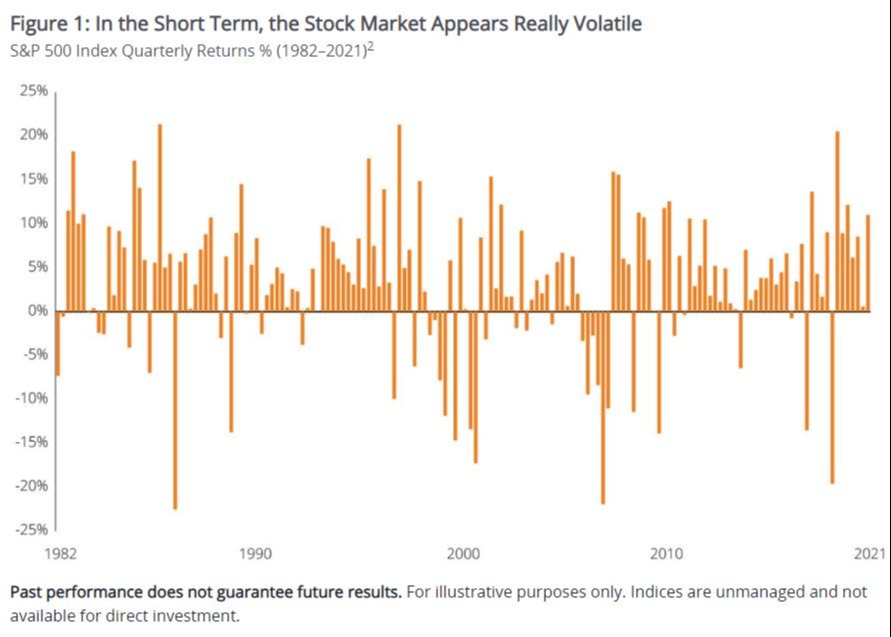 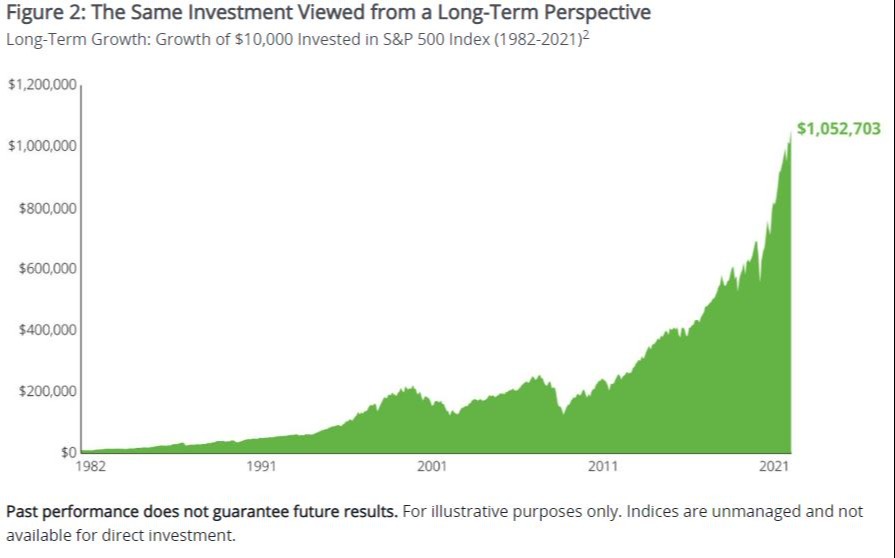 Bull markets have lasted much longer than bear markets. They also have outperformed bear markets: 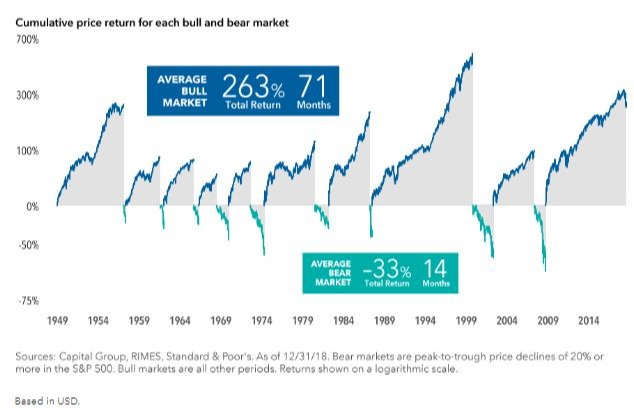 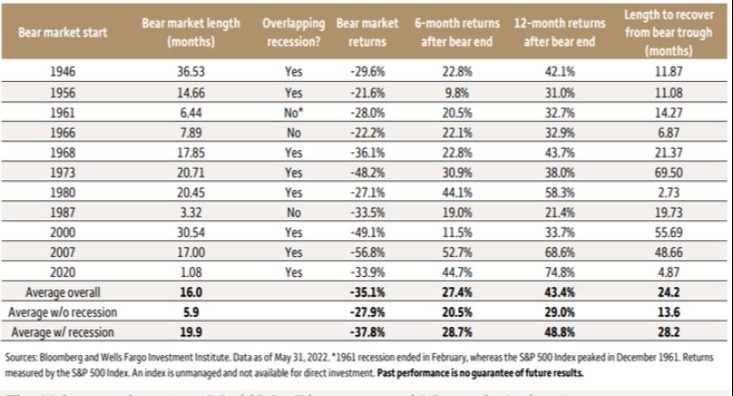 This is where we are six-months into 2022. The S&P 500 retraced to the level it was in January of 2021, which means account values are going to display a similar result. There is no sugar coating of the facts. The stock market is concerned with slowing economic (GDP) and business growth given the pace at which the Fed has to move. This could mean that companies will have the begin layoffs, all the while with inflation marching on. The market is trying to digest the potential outcomes, and this is the reason behind all of the volatility in the market. The market also cannot head to new highs with these headwinds. On the other side of the coin is the potential for a soft landing. Either way, these headwinds will fade in time. Recency bias is an easy tendency to hold on to and we want to find comfort in comparing situations to the most recent time the happened. The last two bear markets we had were centered around a global pandemic and a financial crisis. In no way shape or form is the current bear market similar to those events and should not be compared to them. US banks just passed their annual stress tests last month and the global economies continue to reopen, despite COVID hanging around.

Throughout history the market has gone through far worse (Black Monday, the Great Depression, The Great Recession, major wars, etc.) and eventually the market moved higher. I will remind you that long- term investing involves patience, having a strategy, and sticking to it, unless your goals or objectives have changed. Throughout history, that strategy has paid off and most long-term investors have been rewarded. Timing the market is where the average investor typically lands themselves in trouble. Note that the average investor’s abysmal results in the slide below. They do slightly better than inflation or staying in cash! This is because, without proper guidance, folks are inclined to sell now when things are bad (sell low) and get back in when things are good (buy high). And they repeat this cycle, eroding the potential to build or preserve their nest egg. History has shown that even a very conservative portfolio (40/60 below = 6.4%) does almost 2 times better than the average investor (3.6%): 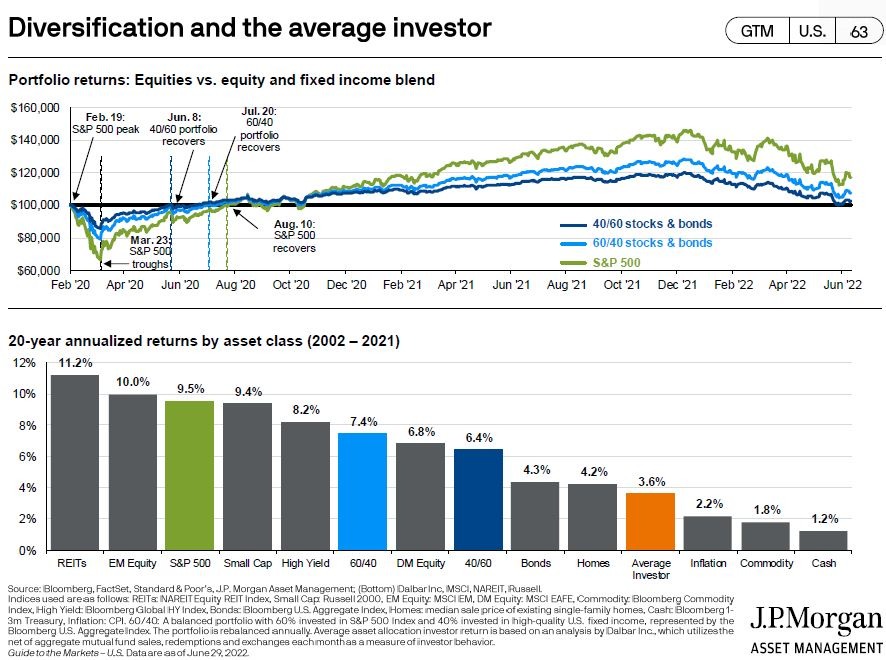 I will end this report with a great quote from Warren Buffet, “I will tell you how to become rich. Close the doors. Be fearful when others are greedy. Be greedy when others are fearful.” This quote is not about how to get rich but rather to frame the time we are in. Since 1949, there have been only 10 bear market periods (the current period is the 11th ). That makes very few opportunities to acquire stocks when they are on sale (see the ‘Cumulative price return for each bull and bear market’ chart above).

If you have any questions or would like to discuss your personal circumstance, please do not hesitate to reach out to me.